How to Build an Under-Deck Sunroom

If your home has a second-story deck, or if you plan to build one, there’s space below it for a sunroom, also called a solarium. The only question is which design and construction methods will suit the site best: An inexpensive prefab structure or a customized four-season addition? Whatever your choice, follow these steps to plan and build an under-deck sunroom.

How Much Does It Cost to Build a Sunroom Under a Deck?

The cost of an under-deck sunroom addition depends on how big the new sunroom will be, what design and features you select, and whether you hire a builder or make it a DIY project.

When seeking a builder, homeowners should get at least three bids and make sure their scope is identical. After receiving the initial bids, this will require some discussion with each builder. What Are the Benefits of Building a Sunroom Under a Deck?

The biggest advantage of an under-deck sunroom is your enjoyment. The new addition will give you a place to gather with family and friends when the rain, wind, or cold keeps you off your deck. Also, because sunrooms are 70 to 80 percent glass, they’re the next best thing to an outdoor living space without the drawbacks of a screen room.

A sunroom also brings more natural light into your house, making the space feel larger. You might use your new sunroom as a TV or game room or as a place to grow plants or keep pets.

Because a sunroom adds functionality and living space to your home, it increases its value. In fact, adding a sunroom ranks higher than many other home improvements, with a 50 to 70 percent return on your investment. How Long Does It Take to Build a Sunroom Under a Deck?

The construction timeline depends on how much living area the sunroom will add and the project scope. Will the sunroom be built from the ground up, including a new deck? Will it be added under an existing deck?

An experienced DIYer might install a basic off-the-shelf sunroom in one or two weeks if there are no changes to the deck or its support structure. But that is rare. Most under-deck sunrooms are custom-designed and installed by professionals. Allow several weeks to two months for the job to be completed.

How to Build an Under-Deck Sunroom in 5 Steps

Protecting the sunroom from rain and snow runoff is the first consideration, and there are systems such as Trex RainEscape that are designed for the task. It uses a series of gutters and spouts installed under the deck boards. This out-of-sight system not only diverts water but also keeps the joists dry, enabling you to install electric lights, ceiling fans, and other amenities in the sunroom.

If you’re building under an existing deck, consult an experienced builder to identify and address any structural issues. Then look online or in your neighborhood for design ideas. The best designs will complement the architectural elements of your house.

Assess the existing deck’s footings and structural members to determine whether they meet the building codes for a sunroom. If you have wood deck boards, replace them with longer-lasting composite boards, such as those made by Trex. This is also the time to install a system to manage water runoff. Last, assess the base that will support the sunroom. A concrete slab is ideal, but pavers can also work.

2. Plan and Choose Your Sunroom Design

A sunroom is much more than a glass-enclosed pergola, and it’s important that you know how you’ll use it when selecting a sunroom design. How your deck and house were built will also guide your choices, as will your budget. Install the sunroom on the south or west side of your house for the most warmth and light. If you want to use the sunroom year-round, add the cost of a heating and/or cooling system to the budget.

A traditional studio sunroom has a shed-style glass roof. To replicate that open-sky feeling in an under-deck sunroom, extend the sunroom beyond the deck railings and install a glass roof over that portion of it. Even a small glass ceiling will make the space feel bigger and give you a greater sense of being outdoors. A three-season design is the most popular type of sunroom because you can use it most of the year without investing a large sum to insulate, heat, and cool the space. For most projects, it’s the ideal compromise between functionality and affordability.

Every sunroom has an abundance of windows, but the glass design has an overabundance, stretching from floor to ceiling. This maximizes the available light. To minimize fogging, condensation, and heat loss, choose the highest-quality glass that your budget allows.

For ultimate comfort, install energy-efficient heating and cooling systems and insulate the sunroom. In northern climates, a four-season sunroom gives you a warm, sunny retreat during short winter days. In the south, you’re protected from the heat during summer. It’s like having a second living room. The only drawback is the expense.

3. Decide between Hiring Professionals or DIY

Off-the-shelf sunroom kits for DIYers are inexpensive, and the simpler the design, the more DIY-friendly it will be. But it’s still a big job that only experienced DIYers should attempt. In most cases, it’s better to hire a professional. You’ll pay more, of course, but you’ll get a more satisfying result.

Because they have no insulation, DIY sunrooms are best suited for temperate or southern climates. Before installing the panels:

Patio furniture is the best option for three-season sunrooms. In four-season sunrooms, you can furnish the space with whatever chairs, couches, and tables you like. Add blinds or other window treatments for privacy and to help prevent the sunroom from overheating.

Alternatives to an Under-Deck Sunroom

A sunroom is just one of many under-deck living space ideas. For example, an under-deck screened-in porch is a better choice if you want to cook in an outdoor kitchen or soak in a hot tub.

If you want a finished look for your under-deck patio, consider covering the joists with an under-deck ceiling.

If you want more room for garden tools or other seasonal items, there are plenty of under-deck storage ideas to choose from.

Other porch ideas include adding under-deck landscaping to create a more pleasing atmosphere around your patio. 25 Thanksgiving Decorating Ideas for Under Your Deck 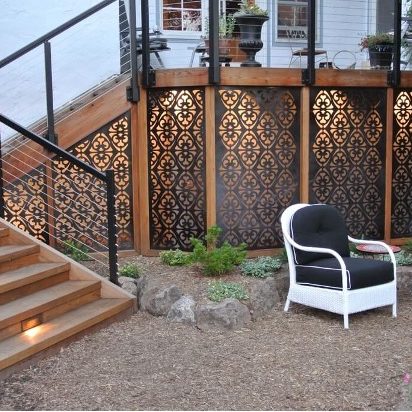