You’ve made the smart decision to install a drainage system under your new two-story deck, so you’ll have dry space beneath for entertaining, storage or relaxation. 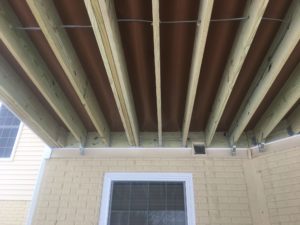 Choosing the right deck drainage system will make a drastic difference in the life of your deck.

The Problem with a Below-the-Joist Deck Drainage System

Watch this video to see what happens to the wood with an under-the-joist deck drainage system. The best deck drainage system is one that is installed above the joists. This will provide 100% protection of all the joists and beams from moisture penetration. An above-the-joist system also helps to hold the screws in place longer and acts as a shield between galvanized metal and wood.

If you’re building the deck yourself, choose an over-the-joist system that’s easy to install. Use this handy chart for comparison. As you’ll see, Trex RainEscape offers a high quality, easy to install a system that is affordably priced.

The bottom line: Install an above-the-joist deck drainage system and your deck substructure will last as long as the decking it supports.

25 Under Deck Lattice Ideas and Alternatives to Using Lattice